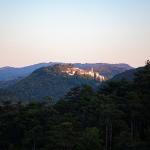 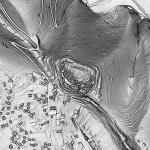 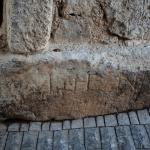 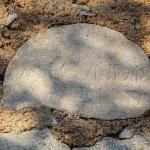 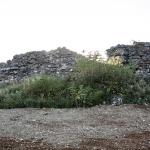 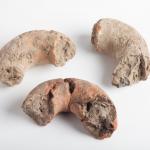 The prehistoric settlement occupied the whole upper part of the Štanjel hill located at the edge of a karst plateau directly above the Branica river valley. It controlled the better part of the Komen Karst as well as the passages through the Raša and Branica river valleys. Carlo Marchesetti identified the Štanjel hill as a hillfort in 1903, describing the 200-meter-long wall ruins as the only remnant of the prehistoric settlement. Today, only the narrow plateau below the peak of the hill to the north is called Gradišče, while the peak was named after the preserved tower – Gledanica. According to the finds of an archaeological investigation, the beginnings of the settlement date back to the Iron Age. The rich layers of the settlement and the remains of prehistoric buildings built of dry stone walls confirm that the hill was intensively inhabited in the first half of the 1st millennium BC, in the Early Iron Age. The remains of Roman architecture and numerous Roman finds on the Štanjel hill reveal that this was an important Roman settlement and a late Roman outpost. In the late Roman period, a fortress or tower stood on top of the hill and was used by the soldiers to control the passage to the Vipava Valley. The area of Gledanica provides good visual communication with the mountain pass on Hrušica (Ad Pirum), through which the main Roman road ran from Italy (Aquileia) to the Ljubljana basin (Emona) and further toward Pannonia. Some researchers believe that the tower on top of the hill is a remnant of a castle shaped like a tower, a fortress from the 13th or 14th century, which is why the tower was named Turn. A village settlement was formed below the tower, which gradually transformed into a fortified camp settlement.

The top of the Štanjel hill and the tower on Gledanica can be reached via a promenade from Štanjel. It goes past the Ferrari Garden, from where you climb up the Štanjel hill. From here, the view extends across the Raša river valley, hilly Vrhé Plateau, and Nanos Mountain to the east, across Vipava Hills to the Trnovo Plateau to the north and the Vipava Valley to the northwest, and across a karst plateau to the west and south.