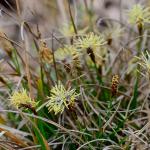 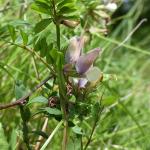 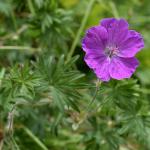 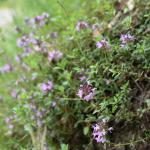 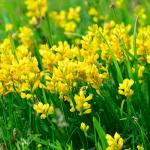 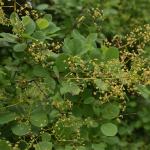 The short botanical trail in Korte takes you through typical forest communities, such as the downy oak and European hop-hornbeam forests, intertwined with dry stone walls up to the hillfort above Korte. Along the way, you will see common ruderal species and typical species of dry habitats, such as the Nice milkwort, thyme, low sedge, rock cranesbill and large-flowered vetch. The trail south of the hillfort enters a cultural landscape where the traveler will see extensive vineyards and olive groves, and enjoy a great view of the Istrian landscape all the way to Sečovlje Salt Pans. In spring, you will come across the Spanish broom, also known as the rush broom or weaver's broom (Spartium junceum), that was in Istria and elsewhere used for binding in the past.

Section 1: Vegetation along the trails
This is the vegetation growing along trails, embankments, parking lots, abandoned arable land and gardens, that develops wherever human presence leaves its mark. This vegetation is transient in nature – it is present until a new disturbance or until the next succession phase (overgrowth phase). Ruderal plants are often annual or biennial. We will mention some of the most common ones below.

Section 2: Downy oak forests and the vegetation of thermophilic hedges
Slovene Istria is a thermophilic oak forest zone dominated by a combination of the European hop-hornbeam and downy oak (Ostryo-Quercetum pubescentis). Beside the downy oak, you will often see the European hop-hornbeam, manna ash and field maple. Once a predominantly agricultural image of Slovene Istria today is an image of shrubs, which represent the overgrowth phase after the abandonment of agriculture and mowing: after the areas on fertile flysch soils are abandoned, the land quickly and persistently becomes overgrown. This category includes pure shrubs without earlier overgrown forms with tall stems. The most common species is the staghorn sumac, a very aggressive shrub with successful vegetative propagation. Other shrubs include the blackthorn, Cornelian cherry, wild privet and common spindle, with the dog rose growing in the most barren rocky places. However, the common juniper can also form shrubs. Juniper shrubs are common in the driest of areas, on ridges with shallow soils. Shrubs are important habitats of birds that feed on their fruit.

Section 3: Cultural landscape and settlements
The area of Slovene Istria is relatively densely populated and is traditionally oriented toward sub-Mediterranean agriculture, so there are many permanent plantations in the area – various orchards, mixed crop plantations, olive groves and vineyards. Vineyards are still predominant. Smaller vineyards of refosco, malvasia and other grape varieties are the most common. They are located on terraces, on flat or slightly flat slopes and some even in valleys. The soil is fertile everywhere, and the clay contained in the soil helps it retain moisture for a long time in the summer. There are few pure orchards, crops vary (peach, plum, almond, fig, persimmon). Former olive groves in extremely sunny places have recently started spreading more and more: olive trees are being planted even in less suitable places, which carries the risk of occasional frost.