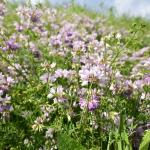 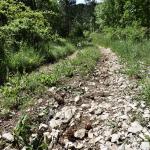 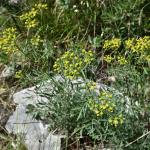 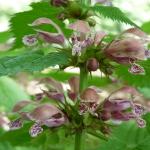 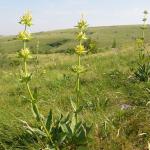 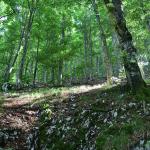 The shorter route in Lanišće takes you through the village of Račje Selo, across the Orljak hill and back. Following the hiking trail past an abandoned quarry, you will reach a European hop-hornbeam and autumn moor grass community, which is a secondary forest community and a transitional form of the European hop-hornbeam or downy oak community. You will notice numerous ferns and other plants typical of communities growing on rocks along the path. Large, white inflorescences on rocks belong to an umbellifer called the candy carrot (Athamanta turbith). Another interesting plant is the pale corydalis (Pseudofumaria alba), a species that loves shady places common in high karst areas. At the very top of Orljak, you will come across a wide range of grassland species typical of the sedge and karst knapweed community growing at this altitude. At the very top of Orljak, you will find some common species, such as the great yellow gentian, mountain kidney vetch, Trieste spring gentian and Austrian viper’s grass. Then you descend back to Račje Selo through a typical Illyrian beech forest, where you can also admire numerous geomorphological karst formations.

Section 1: The hiking trail to the abandoned quarry
The hiking trail going above Račje Selo. Along the way, you will come across species that typically grow along roads and forest edges, such as the crownvetch, Cornelian cherry and Montpellier maple.

Section 3: Downy oak habitats
Here you will come across some typical species such as the downy oak and liquorice milkvetch. The path will also take you past buckthorn habitats.

Section 5: Mountain pastures
From the top of Orljak, where you will find plants typical of dry grasslands and rocks, such as the great yellow gentian and mountain gold, you descend through a typical Illyrian beech forest, where you will see some typical karst surface formations.

Section 6: The path through an Illyrian beech forest with karst formations
The trail continues down a forest road through a beech forest, where you might come across the poisonous Istrian hellebore.