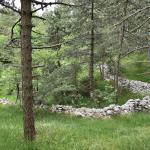 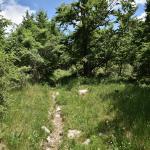 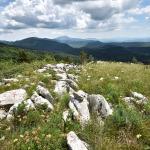 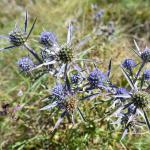 The longer botanical trail in Lanišće, just like the shorter one, starts in Račje Selo. Unlike the shorter one, this trail takes you to the top of Gomila and then past Rašpor and its hillfort back to Račje Selo. Along the way, you will see typical karst structures, such as dry stone walls and enclosed, abandoned sinkholes, as well as typical plant species, such as the common juniper, rock buckthorn and Cornelian cherry. The trail leads you through species-rich grasslands that are becoming overgrown and offer great biological diversity. Southwest of the top of Gomila lie grasslands overgrown with the invasive laserwort (Laserpitium siler). Such grasslands are habitats of some rare, easily recognizable meadow species, such as the slender fritillary (Fritillaria orientalis), poet’s daffodil (Narcissus poeticus subsp. radiiflorus) and great yellow gentian (Gentiana lutea).

Section 8: The path through sedge and karst knapweed grasslands
Toward Gomila, the trail leads you through overgrown grasslands and continues through the forest, where you might find wild asparagus.

Section 9: Overgrown species-rich grasslands
Toward Gomila, the path takes you through overgrown grasslands with a great diversity of species. Here you will find species such as the karst knapweed, slender fritillary and white asphodel.

Section 10: Gomila
The top of Gomila is covered with nutrient-poor grasslands. The typical species include the Carniolan lily, poet’s daffodil and common peony.

Section 11: Western slopes of Gomila
The path that leads to Rašpor goes through overgrown grasslands with large habitats of the laserwort.